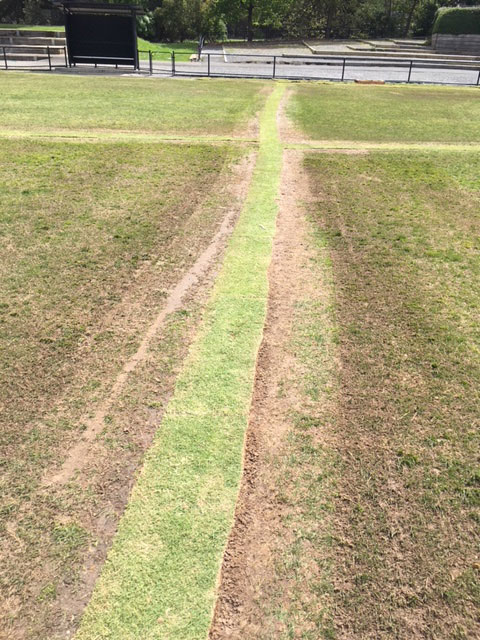 The demand for quality sportsfields that can handle higher usage rates has increased significantly over recent years.

Sports participation rates have exploded with women’s soccer ramping up in the last 5-10 years, and the there’s women’s AFL.

Councils need to provide fields that can handle the extra scheduling and by necessity they have to be high quality to avoid losing games. Correctly designed and installed irrigation is a key factor.

We were recently challenged with a large oval that had to have a new irrigation system installed between a Sunday football grand final and a cricket season opener just three Saturdays later. With just 14 working days available, and the whole field requiring turf sodding over the trenches as well, it was certainly game on for the Century Rain team.

We hit the project with 6 of our own team, occasionally ramping up to 8. Skilled subcontractors were brought in for services locations, survey set out, some trenching works and earthmoving.

The critical path was the key and the team on the ground just kept on hitting their targets on a daily basis. Pressure was on for that opening cricket match to be held with no real option for moving the game!

Late afternoon on the eve of the cricket match the last turf sods were laid, rolled and top-dressed to ensure a safe playing surface.

Fingers were crossed as the ground was inspected on the Saturday morning. The big tick was given and the game was played as scheduled.

1.8km of pipe and cabling, 74 sprinklers, and more than 600m2 of turf sods later, we had delivered the result required for the City of Whitehorse and all sides were winners. Howzat..!